In 2019, more than 15 million passengers boarded Amtrak or Metra trains at the station, making it busier than Midway Airport.

But, it’s not up to the task. Past mistakes have made it a crowded and unpleasant place to catch a train.

A bold plan to expand the station is urgently needed. A group of agencies, including Amtrak and Metra with coordination by the City of Chicago, published the Union Station Master Plan in 2012.

It identifies a number of quick fixes and suggests some big, bold ideas for dramatic additions to the station.

Some progress has been made on the quick fixes, including a new skylight, new air conditioning, better ticket counters, and a new first-class lounge.

Much Left to be Done

Much needs to be done to make Union Station a great place to catch a train. It will require: 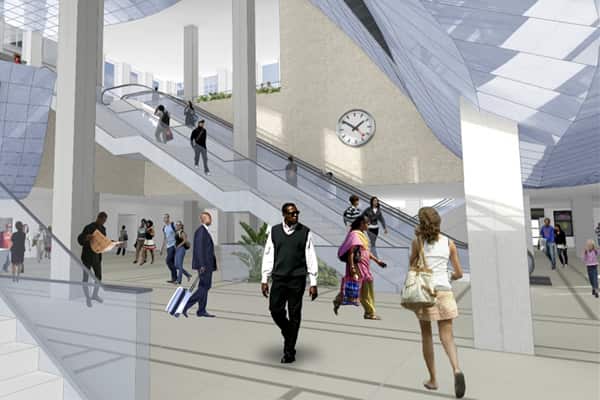 Fixing Union Station should be a top priority!

Tell Springfield to invest in a Statewide Integrated Rail Plan for faster, more frequent and more reliable trains and buses.

How Did It Get This Bad? The original concourse (foreground) was replaced with an office tower in 1969. The headhouse, behind it, remains.

Not Enough Through Tracks

First, Chicago Union Station opened in 1925 as two stub-end terminals, not as a through station (like 30th St. Station in Philadelphia).

There are two through tracks along the river, but they aren’t practical for high-frequency, daily use. Therefore, it is difficult to schedule the through trains the region needs.

Then, a major change in 1969 really messed the place up.

When the station opened in 1925 there were two connected buildings designed to process large crowds efficiently.

The headhouse, on the west side of Canal Street held the main waiting room, ticket counters, customer service and retail. Amtrak has restored this portion.

The concourse, on the east side of Canal Street, was dedicated to getting people to their trains efficiently. It had an open floor plan so passengers could quickly identify and move to their gate and queue up for their train. 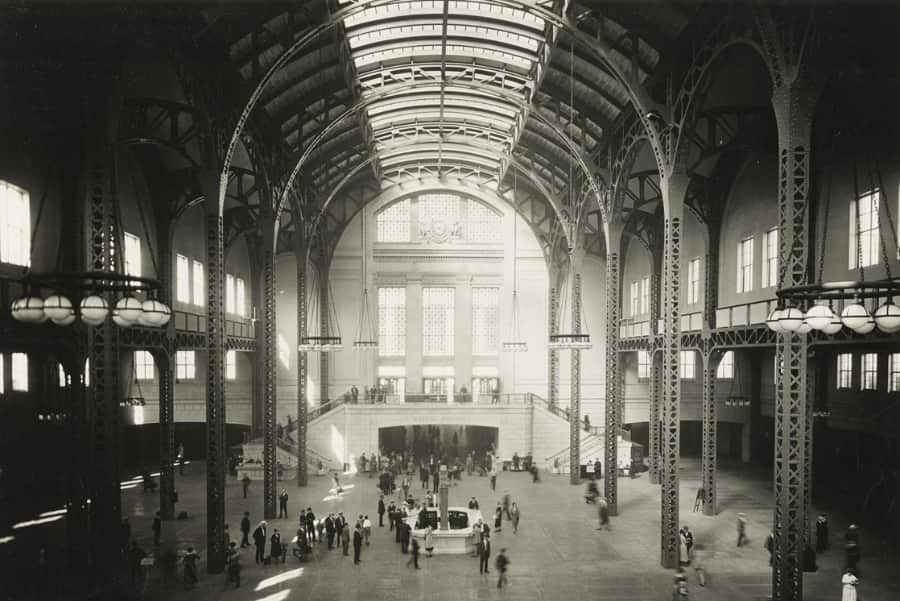 The original concourse was designed to process large crowds quickly and efficiently. The existing concourse has low ceilings and is obstructed by the columns supporting the buildings above. Photo: Rick Harnish.

The columns supporting the buildings and low ceilings make the concourse crowded and hard to navigate.

Malfunctioning exhaust systems in the buildings above the tracks have caused unacceptable levels of diesel pollution in the facility.

Union Station is a critical transportation asset, on par with Midway Airport. Investing in a bold, and efficient, facility will pay dividends to the region just as a bold new airport terminal pays off.

The design of the station – both its appearance and its function – should be designed for more than a 400,000 people every day.

Ultimately, the buildings above the Concourse should be removed and replaced with a new concourse that allows passengers to easily find their trains. 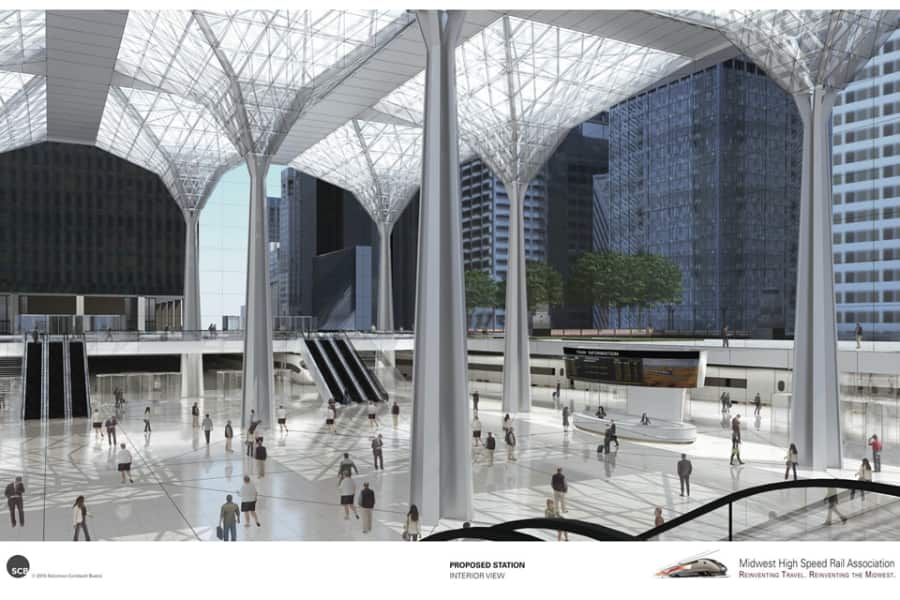 Let In the Light

But, much can be done to make the existing concourse brighter, more inviting, and easier to navigate.

The 2012 master plan suggested raising the ceilings and creating an entrance balcony off Canal Street to allow natural light into the concourse.

Open Up Some Space

Amtrak is designing a total make-over of the concourse.

It will include removing the vacant offices and moving two sets of escalators to create a more open space. 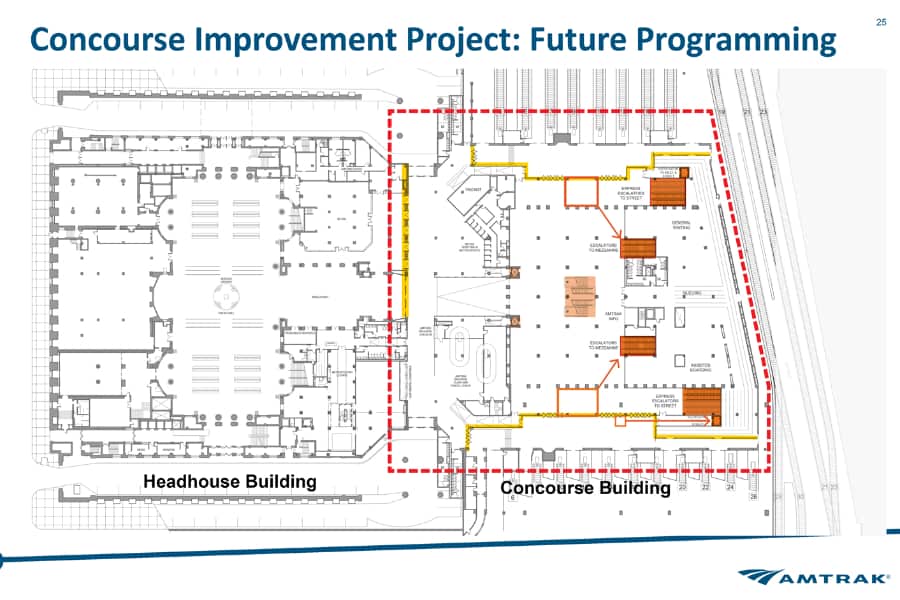 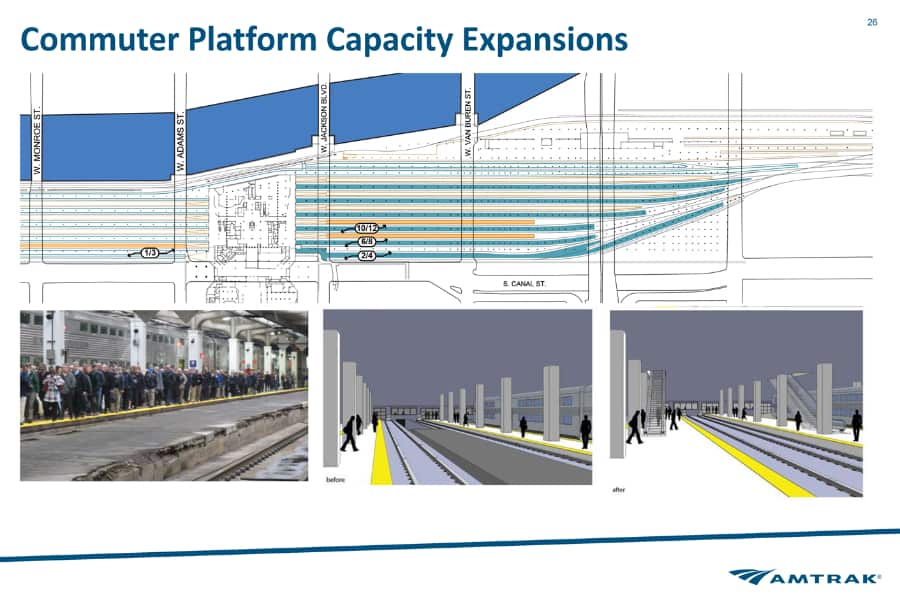 This delays both passengers and trains while creating unsafe conditions, especially on the very busy “BNSF” platforms

Amtrak has proposed removing unused mail platforms between the busiest tracks so that the tracks can be shifted to allow wider passenger platforms.

Through tracks are also needed to allow direct service to O’Hare from the south and east – and to operate crosstown Metra service.

Amtrak has proposed rebuilding unused mail platforms under the old post office to create both through tracks and additional capacity for Amtrak trains terminating there.

A new waiting room will be built on the north end of the platform. New entrances could be built on Van Buren and/or Harrison.

As an added benefit, these would be high-level platforms allowing level boarding with the Midwest passenger car fleet. Union Station and Ogilvie Station are closer together than United’s B and C concourses at O’Hare. And yet, they are treated as if they are miles apart.

Tying the two stations together, to work almost as one, would allow easier transfers between existing routes.

More importaantly, Ogilvie offers better paths to both Madison and Milwaukee than the north end of Union Station.

If they were operated as one station, Amtrak service could be expanded more quickly to those cities.

A direct, enclosed walkway and integrated train depart boards are needed to make it work.

Initial studies of a potential walkway have been conducted. Hopefully, Amtrak will add it into the CHIP proposal.

Clean Up the Air

The older buildings over Union Station were built with systems to pull the locomotive exhaust through ducts to the roofs of the buildings.

Those systems are failing and need to be replaced.

Amtrak is designing a new ventilation system to remove the exhaust and comply with existing fire codes. 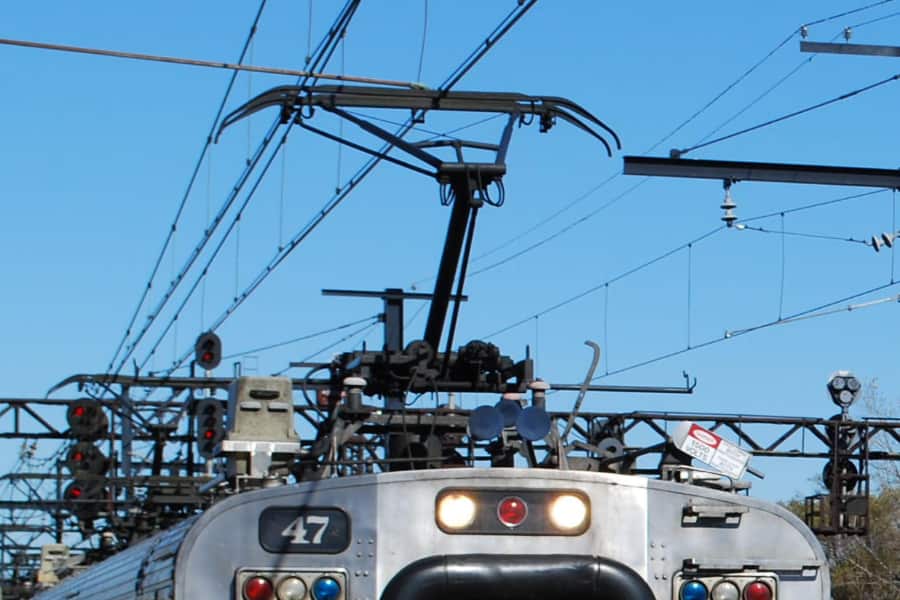 The best option would be to reduce the number of diesel locomotives operating in the station.

The tracks should be electrified with 1500 DC wires, which:

The buildings above the concourse should be removed and a new concourse built.

The Master Plan suggests building a new concourse above the south tracks in the 300 S Riverside block as an alternative.

This would require widening all of the platforms for all of the south tracks. 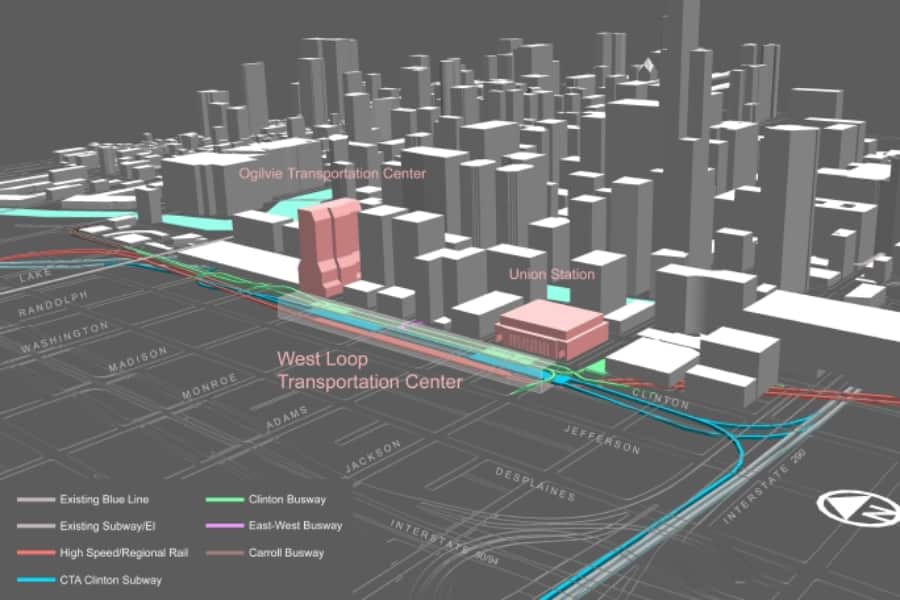 Reconstructing the mail platforms to create through tracks is a great first step—but it will not be enough for future high-speed trains.

Therefore, new tunnels under Canal Street and/or Clinton Street are needed. Similar tunnels have been dug under many stations around the world.

The pedestrian level of the tunnel would also connect Union Station to Ogilvie Station, making it possible to truly integrate them as one. Fixing Union Station should be a top priority!

Tell Springfield to invest in a Statewide Integrated Rail Plan for faster, more frequent and more reliable trains and buses.

These projects are building blocks towards creating the Nation’s high-speed rail hub.

There Should be Trains to O’Hare