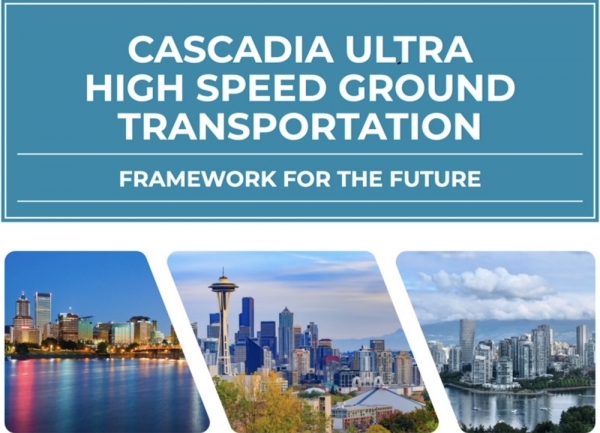 The CEO of Challenge Seattle—a public-policy organization representing CEOs of the largest employers in the Pacific Northwest—made a forceful case for high-speed rail this week on “Think Out Loud,” a program of Oregon Public Broadcasting.

“If we want to create the first sustainable megaregion in the world, this is basic infrastructure that will be necessary to make that possible,” said Chris Gregoire, who also served as Washington’s governor from 2005 to 2013, “to ensure affordable housing, to ensure the ability to get where we want to go in a timely, efficient and affordable way.”

Seattle-based Microsoft is a key partner in the public-private partnership that has studied the possibility of building a Cascadia high-speed rail network. The group also includes the states of Oregon and Washington and the province of British Columbia. The group is especially interested in bringing “ultra” high-speed rail—meaning trains that run up to 250 mph—to the region.

The Cascadia region is anchored by Portland, Seattle, and Vancouver (British Columbia). Its population of 9 million people is expected to grow by about 4 million by 2050. The high-speed line would connect Seattle to Portland (to the south) and Vancouver (to the north) with a train ride of about one hour. A spur line to Spokane (WA) has also been studied.

The host of “Think Out Loud” introduced the segment by noting that “there does seem to be more momentum for high-speed rail in the U.S. now than we’ve seen in a long time. Private and public projects are in the works in Texas, Nevada, and California. A new HSR system is up and running in Florida. And the recently passed infrastructure billhas allocated $10 billion for super fast trains.”

With a regional high-speed rail network, people who can’t afford housing in Portland or Seattle could still have “the quality of life they want” by locating to less congested areas of Oregon and Washington, Gregoire said, while still having a quick and affordable commute to major cities.

Estimates for the cost of the line range up to $42 billion, but Gregoire noted that adding a single lane to Interstate 5 in each direction—from the Canadian border to the Washington/Oregon border—would cost an estimated $108 billion. And it would soon lead to more congestion.

Although Gregoire declined to give a “best-case scenario” for when the line could be operational, she said that advocates are studying the Japanese high-speed rail system and California’s ongoing HSR project for takeaways regarding what works well and what doesn’t. They intend to apply for $500 million to fund a planning study that will answer several key, open questions about the line’s viability, funding sources, and timeframe.

In a Seattle Times opinion piece published in September, Gregoire and two co-authors wrote that “our region has failed to seize similar opportunities before. Fifty years ago, the King County Forward Thrust proposal to build a 47-mile, 30-station rapid rail system was supported by a majority of voters but failed to meet the 60% initiative threshold. As a result, our region lost $1 billion of federal transportation funding to Atlanta.

“The economic impact of this missed opportunity weighs on countless people in the Puget Sound region today who must rely on high-cost vehicles to access school, work and other activities. Building an ultra-high-speed rail system supported by great local transit and affordable housing will make our region more equitable by providing a faster, cleaner and more convenient way to travel for all residents of the region.”